Christianity and the Visual Arts 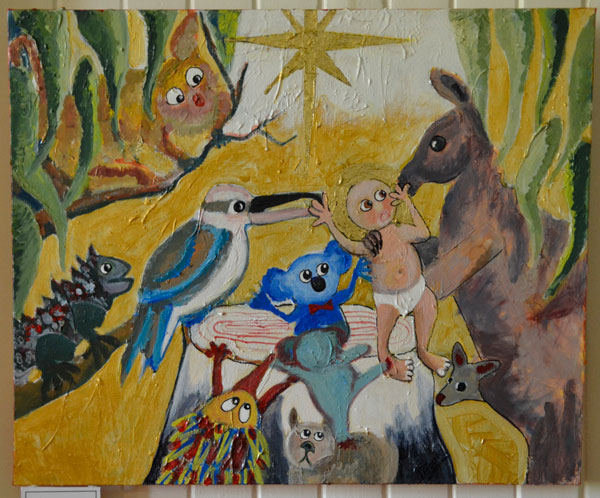 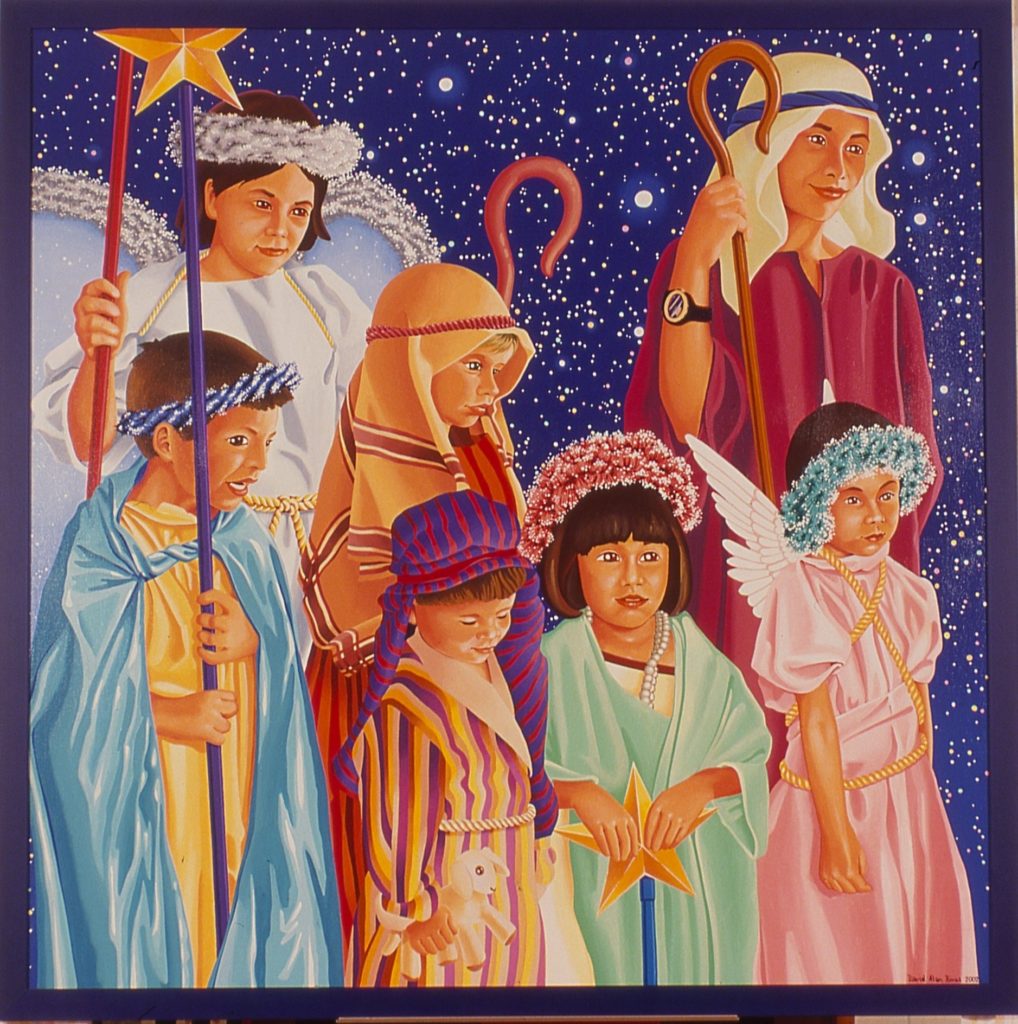 Saints from the Suburbs series: The adoration of the shepherds, Acrylic on canvas, 122cm x 122cm 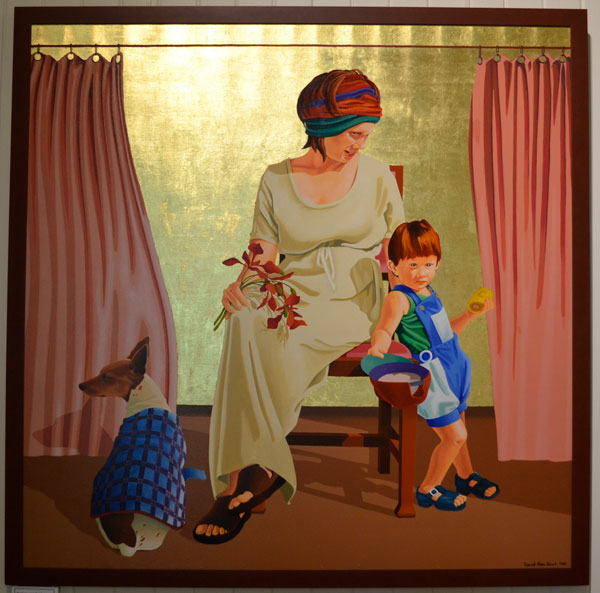 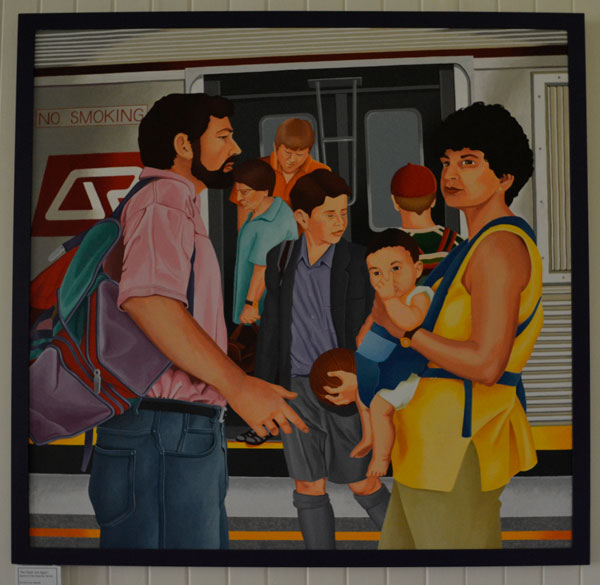 Saints from the Suburbs series: The flight into Egypt, Acrylic on canvas, 122cm x 122cm 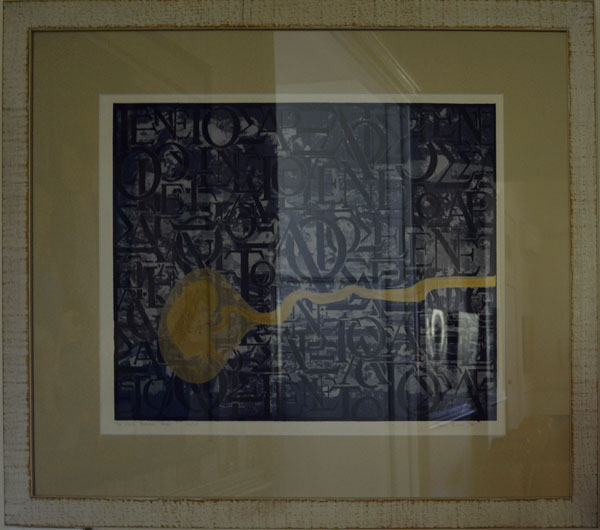 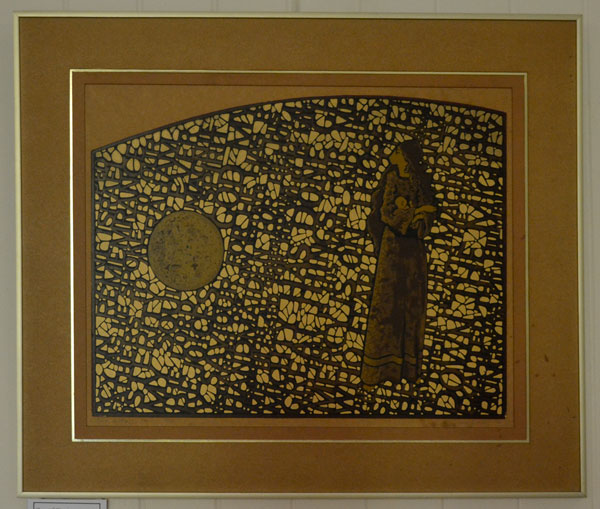 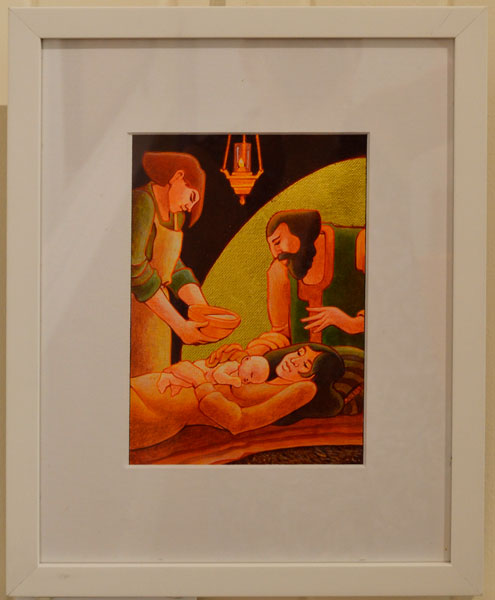 When first exploring this topic I reflected on that only males are discussed at being at the “table” of the last supper. Did this mean that women were not invited to the table? Then I thought about it a bit more. Did it mean that only Middle Eastern Jewish males were invited to the table then? Each time I classified the original people present, it was like the community fragmented a bit more. More and more barriers were put in place to who could come to the table. Only males of certain trades, geographic location… on and on. It’s like we do this all the time with community. We continually fragment it with more rules on who is in and who is out based on the most arbitrary things. It reminded me about the schism between mainland Brisbane-ites and their island living neighbours, each considering the other the outsider, not part of the community. Then it goes a further level with individual island populations considering the other island populations outsiders to their community. We are so good are at building barriers, at fragmenting ourselves.

This work picks up the coastline of Brisbane, fragmenting and drifting off into the sea as a reflection on the way we fragment our society. Once it was all part of one land but over time more and more pieces have broken off and floated away. Large, small, various shapes and sizes of land, islands of communities, surrounded by oceans of misunderstanding and conflict. We isolate ourselves at our peril. Our challenge is instead to welcome all to the table, to truly celebrate the other and invite everyone to be part of the Open Table –men, women, every nation, every occupation…

“No (Wo)man is an Island” is a mixed media piece on canvas and continues the development of my art using painted cutwork. A cross over from my period of working with textiles, cutwork (in embroidery terms) or paper cutting (in mainstream art terms) has come to be the play of overlaying two parts of the story. Each section – painted canvas and painted cutwork -contributes to the whole.

For further information or for purchase please contact me on susan@essentialtextileart.com. To see more of my work go to www.susanpietsch.com.au 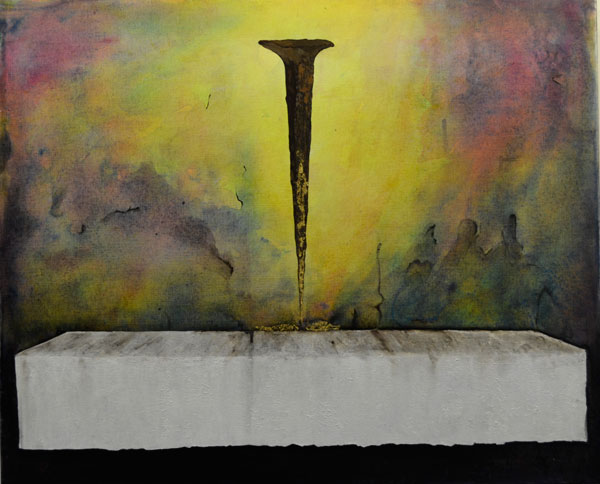 The Table Lays Bare but the Scares Remain, Acrylic and gouche on canvas, varnished with gold leaf, 60.5cm x 71cm

We often see images of The Last Supper (Leonard da Vinci) and wonder at the placement of the figures and their symbolic meaning and, at times, consider the impact on the lives that shared their last meal with their Lord. But what in fact happened to the table after the meal? Was the food discarded? Were the cups and plates thrown away? Is it important to know what became of the “sacred” food, cutlery and crockery?

This artwork lays bare the table, or is it a slab of marble, what does it signify to you.

Note the rusted nail is placed central to the table. What does it remind you of and is this important to you?

To the artist the painting signifies the material in this world and, although his Lord may have used them, they are now discarded. In all of this it is a remainder that the Lord still bares the physical scars of the nails and the scars of Rejection, Deceit and utter Despair. 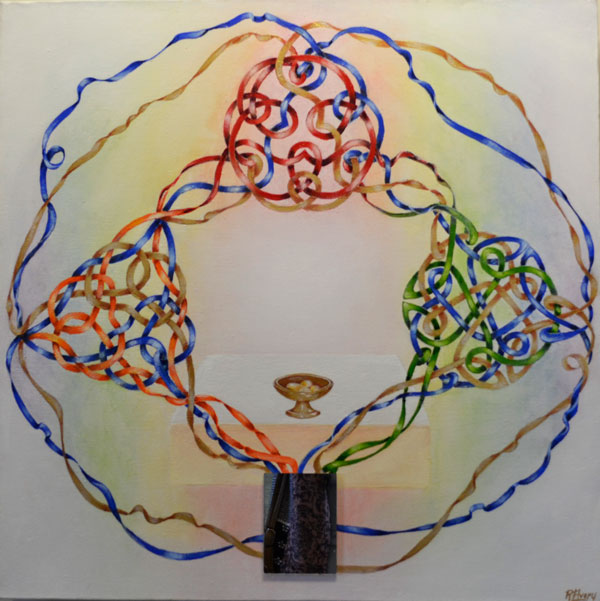 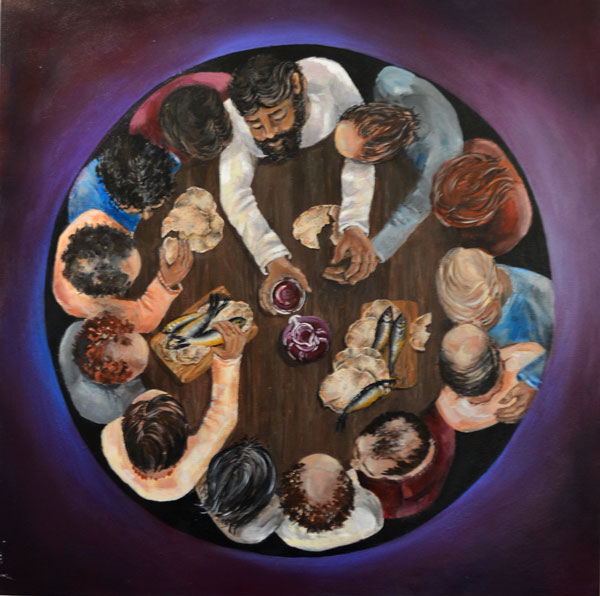 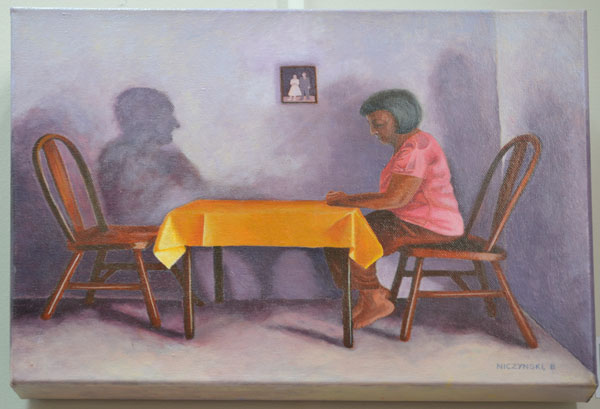 A look at grief.  When one leaves a long term relationship, the other is left to grieve at the loss of rituals such as breakfast at the table.  She too must leave the table, and come back with a new ritual that encompasses completeness in breakfast for one.

I thought of musical notes now missing: the clink of the spoon against the coffee cup, the scrape of the chair, the baritone cough.  I thought about what now must come, a determination to continue and write a new song. 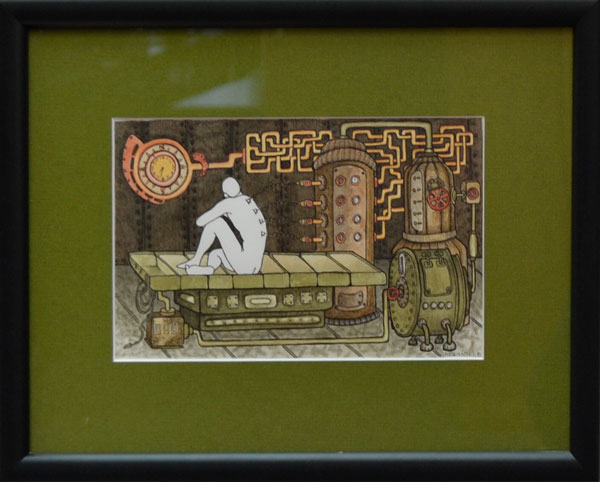 Want to know more about Barbara’s work? Contact her on barbniz@live.com.au 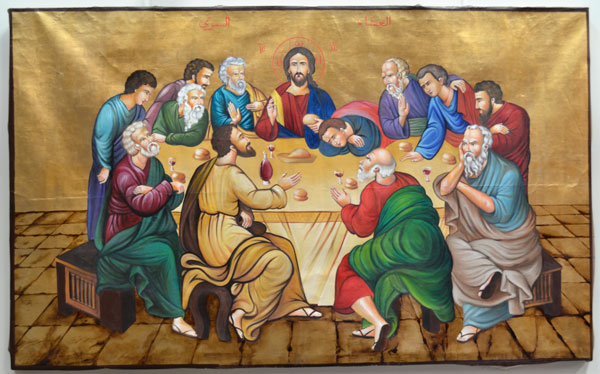 My name is Murhaf Obeid, I am from (Homs, Syria)

After I finished my last academy studies in Topography I went to Paulist’s convent in Harissa- Lebanon, in 2001. And I got a bachelor degree of Science in Philosophy and Theology, 2009. Then I studied all the courses to get Master degree in Church Science (marriage and family) in Suggest University, Beirut, but still working on the final research about Paul Evdokimov.

In 2006, I followed an iconography class for about one year by the iconographer: Nicolas Majdalani, in Lebanon, then In May/ 2014, June/ 2015 I went to Minsk- Belarus and completed a 12 days master-class in painting and gelding icons.

I Participated in drawing icons for a book about old Christian fathers, translated into Arabic by Bishop Joseph Jbara, and drawing celebrity’s profile pictures for “The history of Arabic literature” book (written by Hanna Fakhoury)/2008

2014-2016 I was responsible of writing the main  icons of three churches in Beirut, Lebanon.

Want to know more about Murhaf and his work? Contact him on murhafobeid@hotmail.com 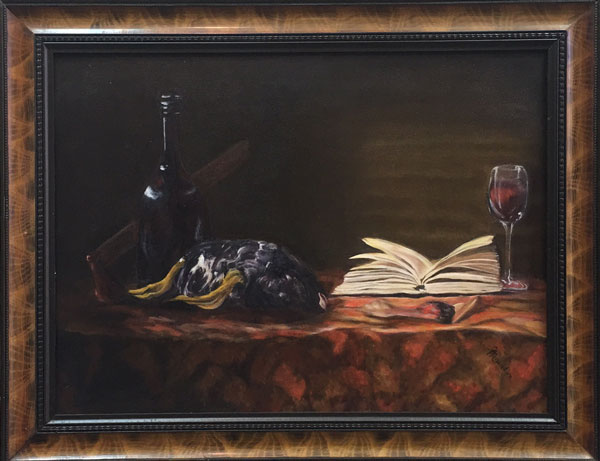 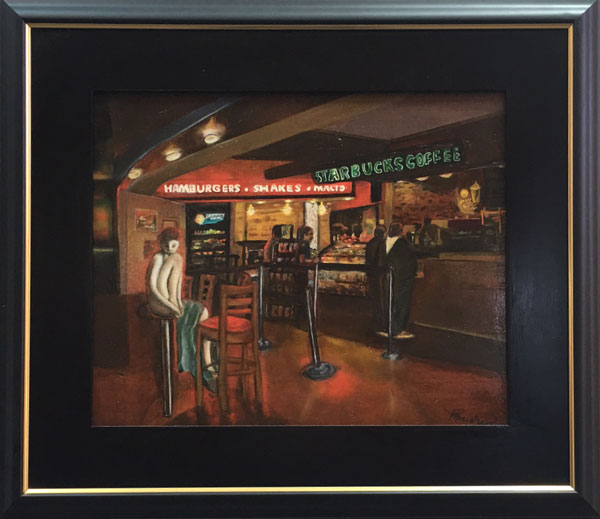 The worldly view of at the table in our current society is fast food and fast pleasures.  Society appears to have lost taking time with family and friends at the table with healthy morsels, conversation, close relationships forming. 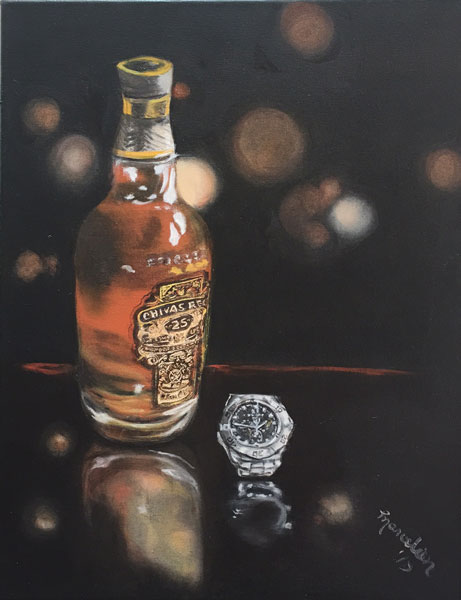 Interested in Marcelien work? She can be contacted on:

My work is from a sketch in my Spiritual Diary, so it is based on personal experience and references Psalm 23.5. “You prepare a table before me, in the presence of my enemies”.

Interested in Jennii’s work? She can be contacted on: